The Tale of the Taos Tree Martini

The legend surrounding the tale of the Martini Tree began in the winter of 1958–1959 at Ski Valley, a ski resort and school located just north of the city of Taos, New Mexico. It was said that during a ski lesson, a female amateur skier was grappling with the challenge of swooping the slopes because of the poor lighting conditions.

After a few faltering attempts, she promptly lost confidence in her ability to go down the rest of the way. To settle the woman’s nerves, her ski instructor and resort owner Ernie Blake told his son to get some dry martini, which was delivered in a Spanish ‘porrón’, a glass pitcher with a long spout. The skiing newbie took the drink and eventually conquered her earlier fears, skiing down the mountain easily and without any incident.

Encouraged by the apparent success brought by the effects of liquid courage, Blake started stationing several ‘porróns’ of martini in strategic locations around the ski slopes to provide the necessary “nudge” to aid nervous skiers. By 1980, it was reported that there were four confirmed “martini trees” in Taos, all of them evergreens that were marked by yellow tape. All that one needed to do was to locate the porróns, which were buried in the snow below.

By then, the cat was basically out of the bag. A ski magazine filed the following report, “One of the elite ski clubs of America is called HAMS, or High Altitude Martini Skiers.” Apparently, one earns membership into this select group by meeting the following conditions: downing a martini while in an unpressurized environment, at an altitude of 11,000 feet (=roughly 3353 meters), and with at least one limb making contact with the ground. 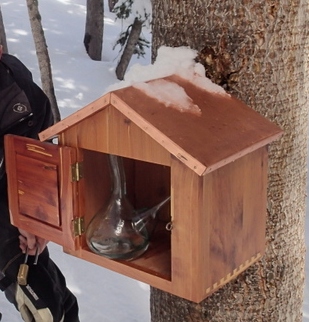 Nowadays, no one is hiding martinis in the snow, but the Martini Tree tradition has evolved into a new form. After ski students have completed a week of ski lessons at the Ernie Blake Snowsports School, they are brought into the woods. Waiting for them is an instructor who gives them access to a lockbox (which looks like a birdhouse) mounted to a tree. The lockbox contains martinis, which are offered to students who are at least 21 years of age. And just to make sure that no one goes over the line, the resort also employs a staff member who checks IDs.

The Weirdest (and Most Nauseating) Foods from Around the Globe
We’ve taken a tour around the world and shown you some of the finest dishes different places have to offer. Now consider this an education of the opposite sort, so you..

How to Make the Best Soft Scrambled Eggs Ever
Nothing beats the classic egg recipes, especially the most basic breakfast recipe of all: scrambled eggs.