College Mascots: The Best, the Worst, and the Weirdest

Nowadays, you’ll hardly ever see a sports event without a mascot. Whether in person or on TV, we know how much these people in cartoonish costumes bring the energy up — be it positive or not-so-positive. U.S. colleges conventionally have people dress up in mascot suits for public amusement, and of course to help the crowd cheer for their team. They may seem silly and oftentimes crazy, but mascots somehow bring people together in commonality. 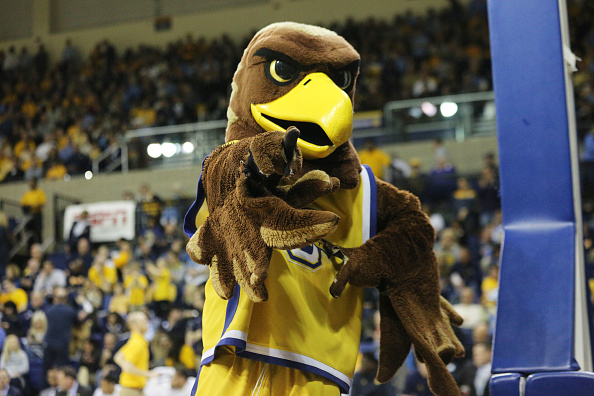 The mascots may not, at times, have a strong connection to the school or even its nickname. The University of Florida’s Albert and Alberta may clearly be Gators and Wichita State’s mascot, WuShock, is a shock of wheat (Wichita State’s teams are called the Shockers) but it’s hard to understand why the mascot for the Stanford Cardinals is a tree or why an elephant was made to represent the Alabama Crimson Tide as a mascot.

A Brief History of Mascots

The word mascot can be traced back to the 19th-century French word “mascotte”, which can be roughly translated as ‘lucky charm’ or something which can bring good luck. 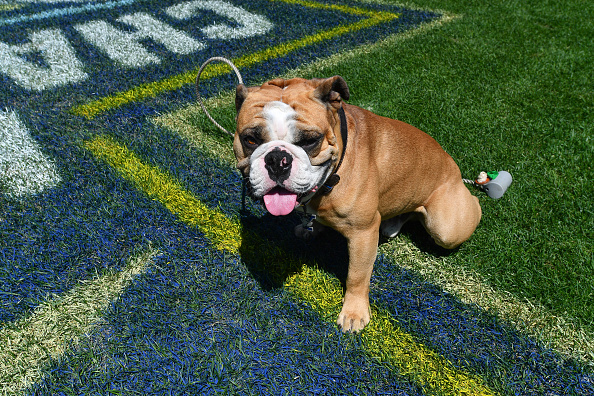 The first university to adopt a mascot was Yale. Back in 1889, they introduced ‘Handsome Dan’ the bulldog, which was a real live mascot. This name has been carried over until today. Currently, they have Handsome Dan XVIII, whose real name is Walter. The Yale athletics site shows how proud they are of Walter. He graduated from obedience school with high honors. “[Walter] is a good role model for all student-athletes,” as the site says. Customarily, student and visitors of Yale greet the Handsome Dan with a cheer of “Boola, boola.” 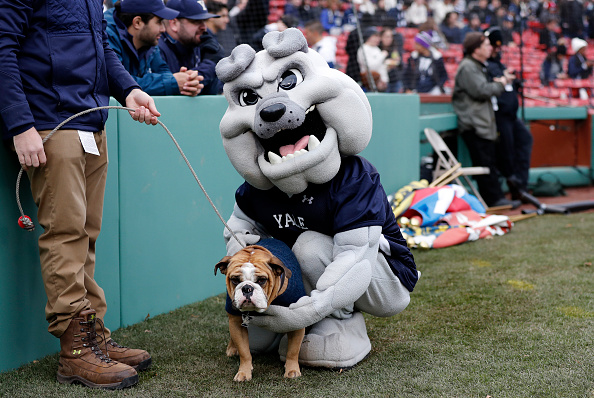 Nowadays, Yale employs a real person in a Handsome Dan costume for most of their sporting events. Walter still graces the people with his presence in the events. Similarly, the University of Georgia Bulldogs also have a big-headed bulldog mascot named Hairy Dawg. An English bulldog named Uga can be seen in the university’s sporting events as well. For the University of Texas Longhorns, they have a costumed human called Bevo and a real live longhorn Bevo at their football games.

Mascots Don’t Have it Easy

Being a mascot isn’t as easy as you may think. They have to stay in character throughout their appearance while being inside a big, heavy, and not-so airy costume. Even the tryouts for becoming a mascot shouldn’t be taken lightly. For example, aspirants for Ohio State Buckeyes’ mascot, Brutus Buckeye, must have their classes scheduled around practices. In addition, they have to attend weight training and games. The Brutus tryout sheet reminds candidates that characterizing Brutus, a big-headed human representation of a tree nut, is second only to their academic pursuits at The Ohio State University. 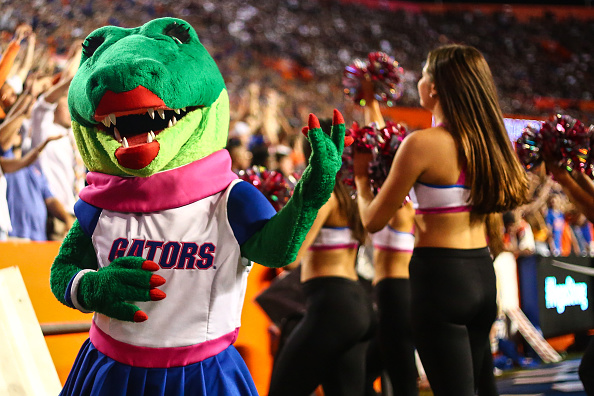 The audition for the Arizona State University Sun Devils mascot, Sparky, is based partly on how many consecutive push-ups an applicant can do. Contenders for Michigan State Spartans’ mascot, Sparty, have to write an essay for their audition. Schools consider mascots as an important representation of themselves.

Most of the time, a single mascot isn’t enough. With more than 600 events per year, the University of Wisconsin Badgers has seven Bucky Badgers. Three different Leprechauns represent the University of Notre Dame Fighting Irish. With a lot of games and appearances happening, a mascot must, above all else, be friendly and appear as non-threatening, especially to curious but wary children ­— and possibly to intoxicated students or alumni.

The Real Essence of Mascots

Aside from having the privilege of putting on an oversized head and a silly costume to represent a school, what else can a mascot do? For one, place a smile on kids’ faces. Jennifer Smith, the “prez” of the National Mascot Association and starter of the mascot business (she started in a garage in Berkeley, California back in 1987), says that kids adore mascots.

For her, kids see mascots as cartoons or magical creatures coming to life. It’s not just the kids, though. Their parents and adults perceive the same idea. “The magic of our imaginative world is walking with us. And you can touch it. It’s very, very, very, very exciting,” says Smith. 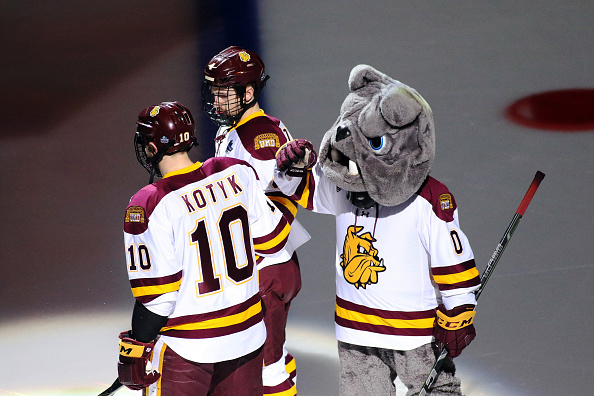 Mascots embody fun. Even though you’re not cheering for the team, you can always cheer for the mascot. For Smith, mascots show what it really means to be true blue. You’ll see coaches, players, and even the president of the school leave. Students may graduate, but the mascot remains a part of the team, of the school. Mascots serve as a permanent memory, something you can go back to and visit.

The Best, the Worst, the Weirdest Mascots

Mascot circles exist, as well as an ongoing competition over who the best mascot is. But there are different criteria for judging, like what the mascot’s essence is. Should it be seen as fun, clever, fierce, or relatable? 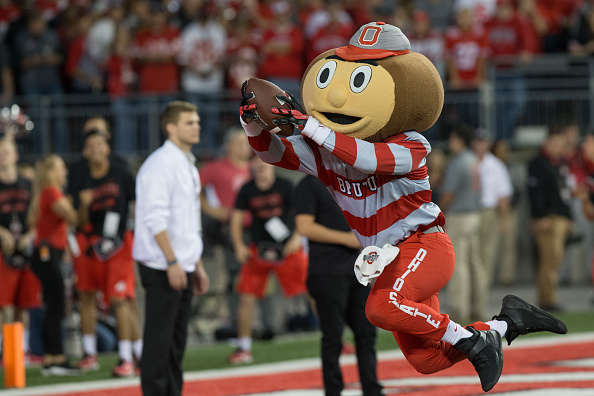 It’s certainly difficult to judge, and we are not going to crown any bets just yet. But here are several mascots to be considered:

South Carolina Gamecocks: Sir Big Spur is one of their mascots. He has his own field goal post which he perches on when games are being held at the Williams-Brice Stadium in Columbia, South Carolina.

University of Akron Zips: Their nickname is the shortened version of Zippers. Unveiled in 1927, the nickname was made as an homage to a pair of rubber boots manufactured by the BF Goodrich Company of Akron. The school’s mascot is Zippy the sneakered kangaroo.

Whittier College Poets: The mascot of this college from California is Johnny Poet. He sports a tricorne hat and a fountain pen.

St. Louis College of Pharmacy Eutectics: The name Eutectics, or Euts for short, is a chemistry term related to elements melting and solidifying at a certain temperature. Mortarmer McPestle (Morty, for short), a yellow beast with mortar and pestle in hand, personifies the team’s mascot. He is portrayed on the school’s athletics logo as he rushes into an athletic battle. 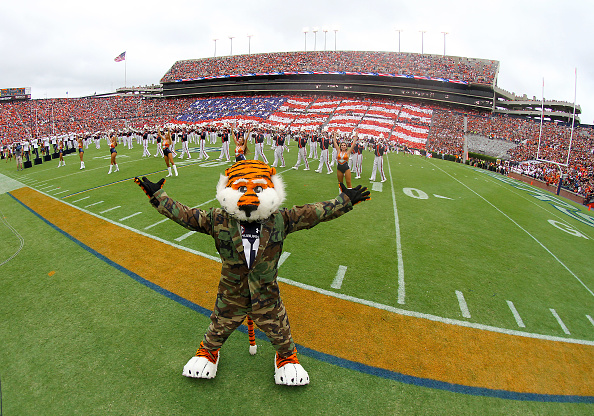 Scottsdale Community College Artichokes: Students from a suburban Phoenix college protested how their school spends too much on athletics instead of academics. The students vetoed the nicknames “Scoundrels” and “Rutabagas” for the team since they were too mainstream. Instead, the students voted on another name and Artie the Artichoke was born! He’s often shown as the grinning green artichoke.

University of Tennessee Volunteers: Smokey, a live animal mascot, is a bluetick coonhound. The university also has a real live frontiersman-looking human and several other people dressed up like Smokey.

University of California, Santa Cruz Banana Slugs: Their costumed mascot is Sammy the Slug, who used an “overwhelming proslug straw vote” by the students in 1986.