Hidden at the northeastern edge of the Dominican Republic, jutting toward the Atlantic ocean, lies the Samaná Peninsula. It exists as if in a world of its own, cutaway from the rest of the nation. This corner of the Dominican Republic is known for its long shores, pristine beaches, and white sand, cordoned by majestic mountains with jagged limestone escarpments; hills filled with coconut trees swaying to the rhythm of the ocean. The place is largely uncrowded. Most people come here to find themselves in the midst of one of the country’s most isolated beaches. 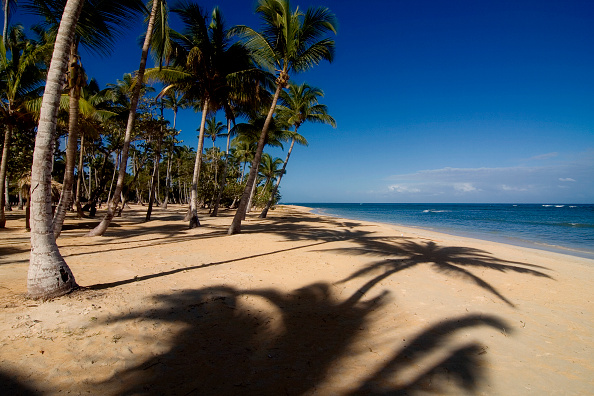 The Playa Rincón is situated in the easternmost area of the peninsula, that’s undeveloped. It’s 3 miles long and beyond it are comfortable seaside communities set on a tropical landscape. It’s one of those places that are great for shooting films or hosting adventure activities. If you spend some time at the Bay of Samaná, you will likely come across a humpback whale. You can set out early in the morning and hike through the Taino forest, explore the many caves of the Los Haitises National Park, or glide along the waves of the Atlantic in Las Terrenas.

Large numbers of humpback whales swim to Samaná annually for a change in water temperature, to loll in its warmth, swimming around the peninsula. They are often found in major breeding areas: the Bay of Samaná, Silver Bank, and the Navidad Bank. From January to March you can find these beautiful creatures feeding, mating, and giving birth there. These breeding grounds are protected, making up the Dominican Republic’s Sanctuary for Marine Mammals, which was started in 1996. It is the only such haven in the Caribbean. 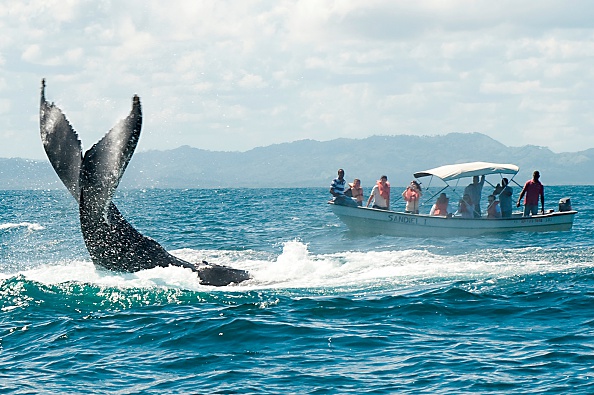 The Bay of Samaná is the nearest destination to go for an adventure, by the south shore, and many boats are scheduled each day for whale watching trips during the in-season. Boats sail from the town of Santa Barbara de Samaná. Whales are not hard to find in the area.

Stay a while and you will surely see these huge mammals cruising along, emitting sounds that leap from the surface of the sea, seemingly transforming into music along the way. They are often found tail lobbing, breaching, swimming freely across the peninsula waters. They are a refreshing sight from small towns along the coastline, a bit further in places like Las Terrenas, Punta Balandra, and Las Galeras.

Limón is a small, lively town located north of the peninsula. You can find one of the tallest waterfalls in the country there, called ‘El Limón’. The cascade of water drops down from a height of 130 feet, from the zenith of the Sierra de Samaná, flooding a bright green pool beneath that’s surrounded by a thick lush forest. 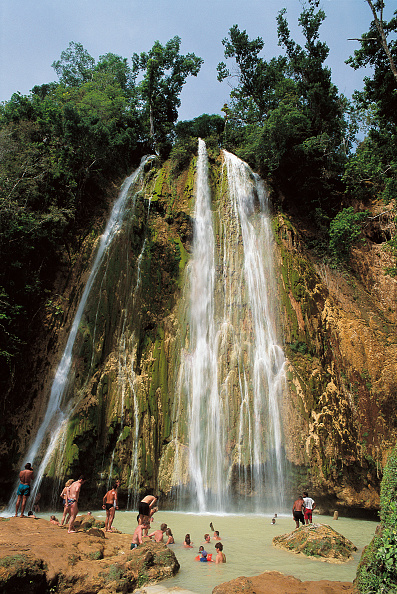 To get here, one has to start at one of the many ranches in the area. From there, one takes a horse ride across a narrow path that’s at times muddy, and slippery, until it knifes into the thicket, and at the other side of it, you will see the steps that lead to the mighty waterfall.

If you’d rather hike than horseback, the best thing about it is that you could have a better look at the area’s lush vegetation. Here, royal palms, rare orchids, mango, and pineapple trees abound. Birdwatchers may stay and observe the Dominican Republic’s national bird, the palmchat, along with various other species. One may explore ‘El Limón’ from many parts of the peninsula where tour packages are offered.

Take a boat ride from the Bay of Samaná to get to the Los Haitises National Park. This nine-mile cruise will lead you to one of the biggest protected areas in the country, which is also a primary water source for communities located on the eastern coast. 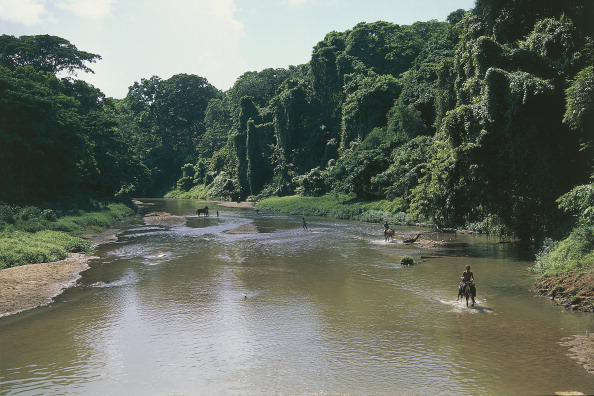 The journey to Los Haitises National Park is worth taking. It’s a vital bird-nesting sanctuary and the surrounding waters are punctuated with knolls, rising almost a hundred feet high. These rocks are home to rich flora, and you can spot vultures, herons, and pelicans there. The vast lands of the park contain mangrove trees, and lush rainforests edged by limestone cliffs.

Boat rides will occasionally stopover in areas where people may follow trails that lead to two Taino Indian caves. The highest number of pictographs and petroglyphs in the country can be found here. The walls become stories about its earliest inhabitants, with drawings of shamans, gods, whales, and various human forms on display. 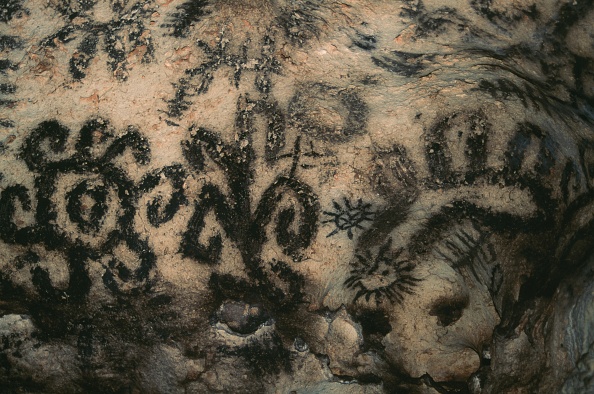 You can book a ride to Los Haitises any day of the week from the town of Samaná.

Riding the Waves in Las Terrenas

Situated an hour away from the secluded beach of Playa Rincón is the town of Las Terrenas, where a consistent gale is increasingly making it a popular spot for wind water sports. Kitesurfers and wave surfers frequently visit the area during the months of September to December, gliding, spiraling in the air off a huge wave. 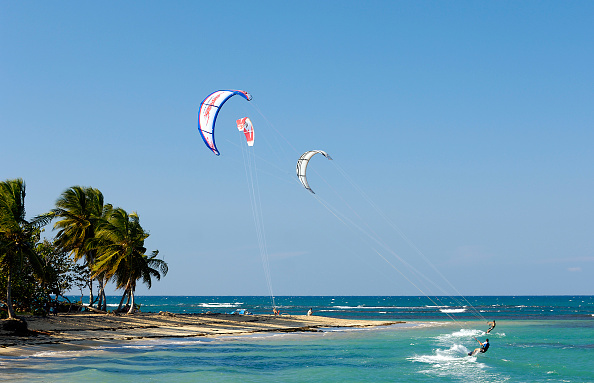 For newbies, there’s an establishment that teaches surfing lessons, called the Carolina Surf School, headed by a former DR kitesurfing pro. It is located at the Playa Bonita, and you may enroll there at any time of the year. There are more options, too, at the Playa Punta Popy, where other kitesurfing establishments are located, and one may go there and observe noobs braving the ocean currents through the day. Of course, one can’t go wrong by relaxing in one of the pubs close to the beach, sipping a cocktail.

There are more uncrowded beaches in the area, if you have time to explore them, along the Atlantic shoreline, going west of the Playa Rincón. If you’ve followed the “Survivor” reality TV series, note that some of the shootings were done here. Playa Rincón is one of the most scenic places in the country, where it leans on dark metamorphic cliffs and boulders, facing the clear blue sea, with a shoreline that glistens against the sun with its powdery white sand stretches, bordered with prehistoric chambers. 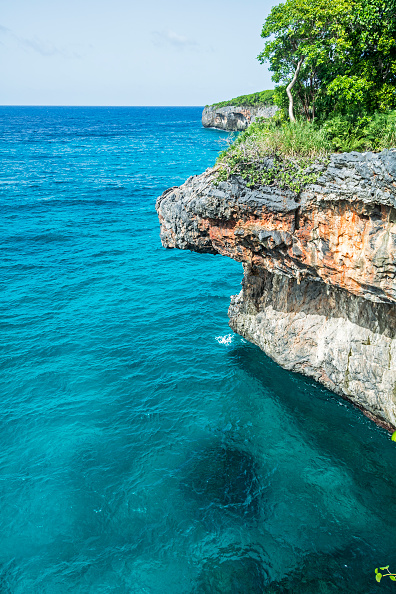 The lovely white sand cove of Playa Madama nestles just within a mile. Adventures to these areas by boat hopping start from Las Galeras.