On November 30th, 1955, William Michael Albert Broad, later known as Billy Idol, came into the world. As a member of the band, Generation X, he became a well-known figure in the Punk Rock Scene. Shortly after performing with the band, Idol went solo and eventually managed to get TV gigs, courtesy of MTV’s ‘Second British Invasion’ campaign. The UK Top Ten single White Wedding has some curious facts that may confound some people. Here are five facts about Idol’s song that people may be unfamiliar with.

The Song Has Very Little To Do With His Sister

Contrary to popular belief, Billy Idol’s White Wedding had nothing to do with his sister at all. It was simply because ‘little sister’ was widely used as a slang term for ‘girlfriend’ during his time.  The song tells the story of a man who has feelings for the woman and painfully witnesses her marriage to another man.  While it is true that the singer has a younger sister who was set to tie the knot, she was simply used as inspiration for the song. Writing the title before the lyrics was actually Billy Idol’s schtick when it comes to writing songs.

Most would agree that White Wedding helped a lot in launching Billy Idol into stardom. David Mallet, who also worked with Queen and David Bowie, was the director for the music video.  During those days, Billy was nearly broke that Mallet lent him a hand in exchange for a fee. Set as a ‘nightmare wedding’, Idol was made to dress as a goth marrying a normal girl, with then-girlfriend Perri Lister portraying said girl.

Some of the more unforgettable pictures include a motorcycle crashing through a church window, a wedding ring made from barbed wire, and the dancers dancing their backsides to the beat of the song. In the book I Want My MTV, Mallet was quoted: “In those days, he was the greatest looker and mover since Elvis. Before ‘White Wedding,’ nobody would have admitted that was even possible. One look at that video and they got him.”

If you ever heard the song played during a wedding, then the person is obviously unaware of the song’s subject matter. In fact, the imagery shown in the video should convince one that the music video is actually anti-marriage.   Do not ever choose a song like this when you and your betrothed are planning your wedding just because it has the word ‘wedding’ in it. 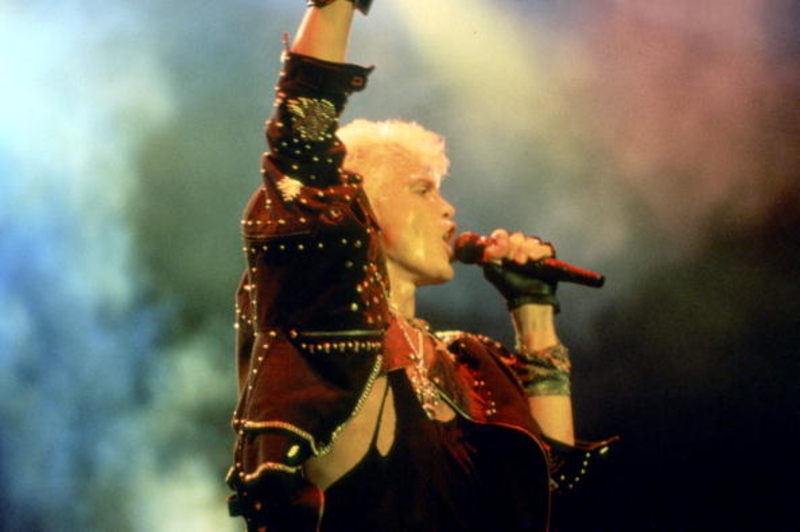 If anything, White Wedding can be considered the ‘Stan Lee’ of music videos. It was used quite often in cinema, such as the tattoo scene with Alabama in the 1993 film True Romance.   It was also used in Adam Sandler’s 1988 movie The Wedding Singer. The song plays at the part where he remained at the altar and he told his friends to “turn this crap off.” Later on in the film, Idol himself made an appearance, helping Sandler and Barrymore’s characters get together.

White Wedding was also featured on the following: Skate videos for CKY and Toy Machine’s Jump Off A Building. A wedding storyline in the British TV Show Hollyoaks Stephen Colbert’s Talk show in 2013, where he let a newly married couple dance to the song as sung by Audra McDonald BBC’s Blackpool.

Additionally, there was another version that was sung in My Big Fat Greek Wedding 2 by George Kostoglou.   You can find White wedding at many different video sharing sites like YouTube, and then listen and dance to the beat of 1982’s Punk Rock scene. If you want a nice remix, lend your ears to Herman’s Hermits rendition of the song.