Can You Tell The Difference Between Limes and Lemons?

October 17, 2020 | Zoe Karbe
Share on Facebook
These two citrus fruits often seem rather interchangeable. Both are great for a few drops into your tea, a tangy addition to some grilled fish, or perfect sliced up in a cool drink. Granted, one is a little bigger and greener than the other, they still seem pretty similar, but there are some important differences you’d be interested to know about.   According to US Citrus, a leading producer of America’s citrus, regular limes are actually less flavorful, which is why than it when it comes to adding a little kick to your food, lemons or key limes are ideal. 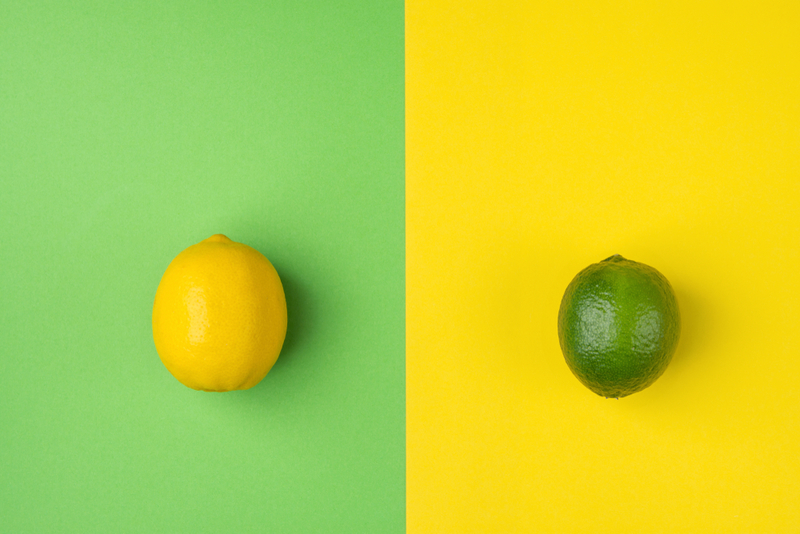 How to Complement Your Food

When it comes to what goes best with your food, it’s limes that go really well with tropical dishes, while lemons pair better with European recipes. In terms of nutritional value, limes are surprisingly healthier as they possess higher amounts of vitamins and minerals like vitamins A and C, calcium, folate, and phosphorus. Lemons however tend to be higher in acidity and have minerals like potassium and magnesium.

If you’re looking to science for the real differences, then you might want to toss each one in a bowl of water and see what happens. You might be surprised to find that lemons actually float and limes sink. And it doesn’t have anything to do with either one having thicker or thinner skin. In fact, in an experiment conducted by Best Food Facts along with RD Sarah Downs, both kinds of citrus were tested, both were whole, peeled, and sliced. In all three states, the limes continued to drop further whereas the lemons remained fairly afloat.

According to Downs, “The reason limes sink and lemons float is due to density, or the mass per unit of volume. An object will float if it is less dense than the liquid it is placed in and will sink if it is denser than the liquid it is placed in. Lemons and limes both have densities that are very close to water, so you would expect that they would both float. However, limes are slightly denser than lemons, which is why they sink and lemons float.” Who knew? Whatever the differences, at least both do the same job!

Mustard vs. Ketchup: Which is Better?
In the Western fast-food culture, ketchup and mustard are to condiments what salt and pepper are to spices. Sure, they're not quite as all-encompassing as the base spices. With..

The Marvelous History of Lemonade
Nothing beats a refreshing glass of lemonade on a hot day. Before you make a cold pitcher of this classic thirst quencher, let’s take a brief historical trip on the origin of this..

Journey Into Foodie Haven With These Exciting Culinary Comics
If you’re a real foodie, then you’ll know that your culinary love doesn’t only have to be expressed through the kitchen. Introducing food comics. These incredible graphic novels..