Welcome to the Smallest Museum in Switzerland: A Window in a 600-Year-Old House

Every month or two, a collection of items is displayed in the window of the door at 31 Imbergässlein (Ginger Alley) in Basel, Switzerland. At the onset of the year 2019, the theme was Paris, or to be exact, the Eiffel Tower: A snow globe made from plastic alongside a small Montmartre and a little Eiffel Tower were fixed on top of an Eiffel Tower made from glass, packed with colorful sand. Intertwined photographs of the popular French attraction suspended at the back of Eiffel Towers made from brass and plastic featuring various sizes, Eiffel Tower key chains, and a pocket watch engraved with the image of the Eiffel Tower. 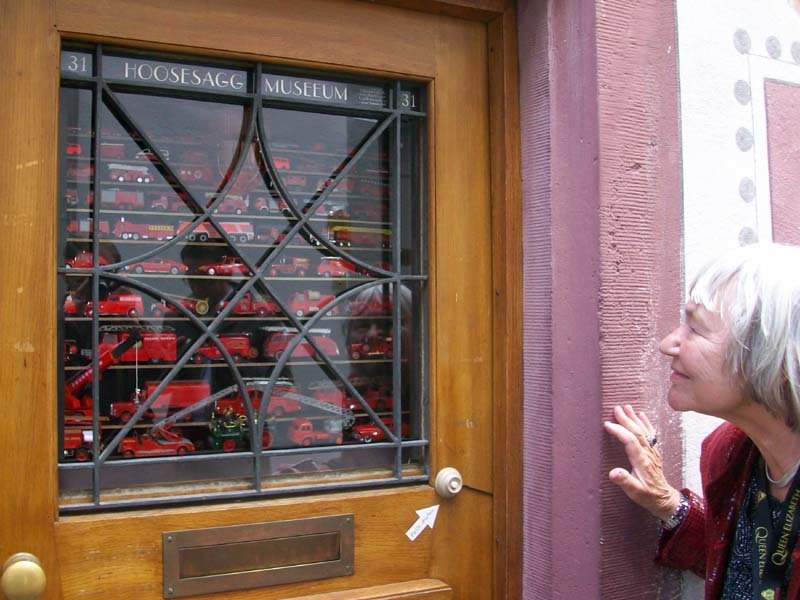 All these artistic displays of various themes are the highlight of Hoosesagg Museeum ( or Pants Pocket Museum). You won’t pay for any kind of admission ticket but getting inside the museum is prohibited as well. The whole museum is contained inside the 2 by 2 feet window in the door of the 600-year-old house of Dagmar and Mathias Vergeat, which sits on a slender side road at Old Town in Basel, Switzerland. The Vergeat family has maintained what is possibly the tiniest museum in Switzerland for 24 years. And although a large number of the exhibits are derived from the Vergeat personal collection of memorabilia, the museum is also open to other people who own a collection of at least 30 items subject to evaluation. Dagmar’s passion for collecting memorabilia has been a lifetime pursuit. Ever since she was a little girl, she began building up an assortment of Swiss cowbells.

“I like to collect because I don’t like to throw things away,” she shares in German. If you get a sneak peek inside the room at the back of the Hoosesagg Museeum door though, it becomes apparent. You find a myriad of items covering the walls, suspended in the ceiling and set up in display cases. Bottle stoppers featuring engraved faces are encircled with wristwatches. You will also find tea eggs, a range of sunglasses made from plastic, different Rubik’s cubes, toy TVs, and Dagmar’s personal collection of bells which she started assembling when she was still a little girl. The room filled with collectors’ items was originally a bedroom of the eldest daughter of the Vergeat family. When she moved out, the coupled decided to turn it into a room for collectibles. Although Dagmar has yet to catalog her collection, she estimates that it totals to around a thousand. “Each individual object is not really worth that much, but all the objects together make one great picture,” Dagmar says.

During 1995 however, individuals who wanted to witness that great picture were beginning to get on Dagmar’s nerves. Based on her accounts, a number of walking tours have scaled the stairs of Ginger Alley almost on a daily basis ever since she and her husband relocated to their house in 1986. The house has some history though: the first midwife of Basel resided at number 31, although the tours likewise paused outside to examine the building’s painted façade. Rectangles with rust paintings and faded black circles encompass the six-story house, making it stand out from the rest of the other white, half-wooden, feudal houses within the alley.

Close to the windows of the third floor, just underneath the bare beams of the upper floors, you will find a painting of St. Christopher carrying the baby Jesus. Although the majority of tourists maintained their sights on St. Christopher, Dagmar found out that there were also those who just couldn’t resist the temptation of gazing on the ground-floor windows of the house.

As opposed to obstructing the line of sight through curtains, the couple opted to construct a display case tailored for the window pane in the door. Dagmar originally attempted utilizing her new display case for the sale of old Carnival masks, ice skates, and other used items. But because no person rang the doorbell to inquire about the items for sale, she decided to display one of her collections in the window.   “The first display was schnapps glasses,” she says. “We left [them] for three, four, five months, and then thought, ‘It’s boring, always having the same thing.’” Thus, the couple began alternating other “schnickschnack,” which are called tchotchkes in Swiss German, using their window. And because the majority of the pieces being displayed could fit inside a pocket, they named the exhibit the Pants Pocket Museum. 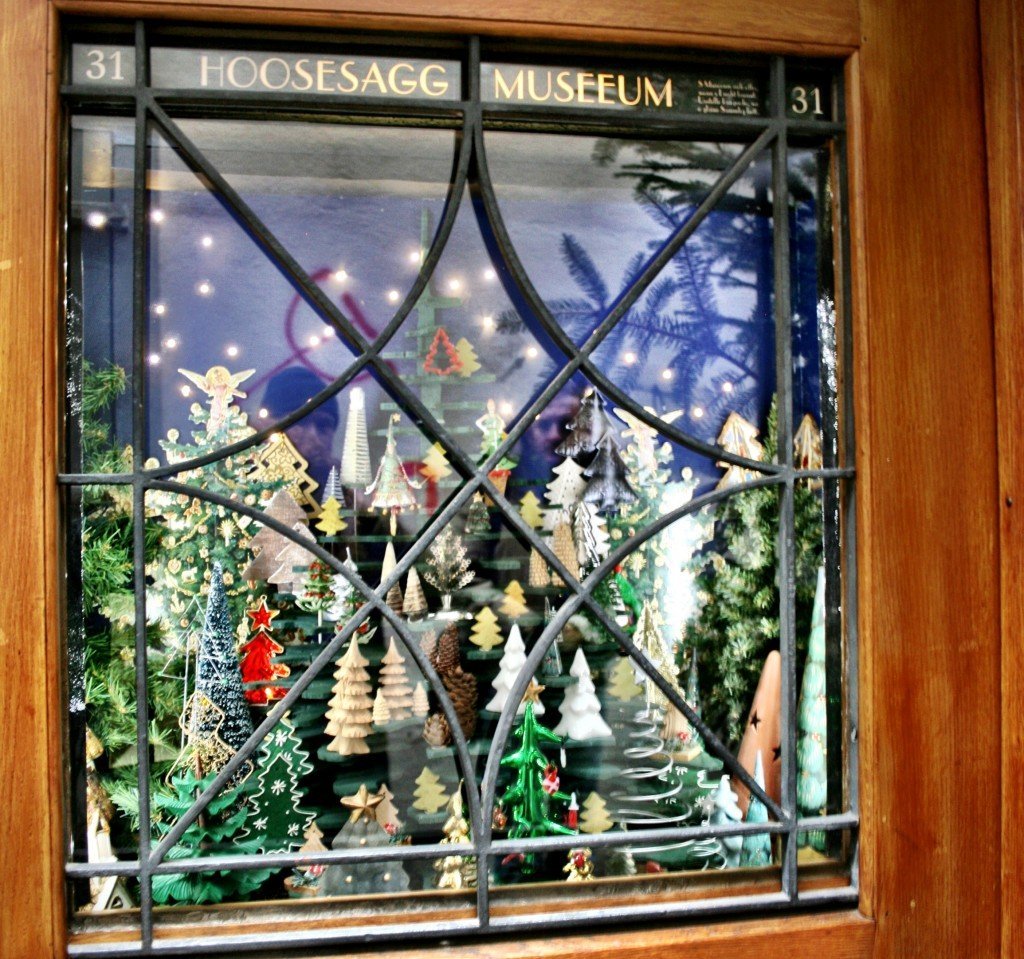 Nearly 6 months later, people began ringing the doorbell inquiring on whether the Vergeat could present their personal collections. At the start, the Pants Pocket Museum highlighted plenty of collections with animal themes, such as elephants, rubber ducks, donkeys.“Unfortunately, I didn’t write it all down,” Dagmar says. “Who would have thought this idea would last more than 20 years?” At present, people who fancy displaying their very own personal collections send Dagmar email photographs of their items. Once considered – Dagmar guesses a 95% approval rate – those people would pass her about 50 items in which she would select anywhere from 30 to 35 to use as a display. 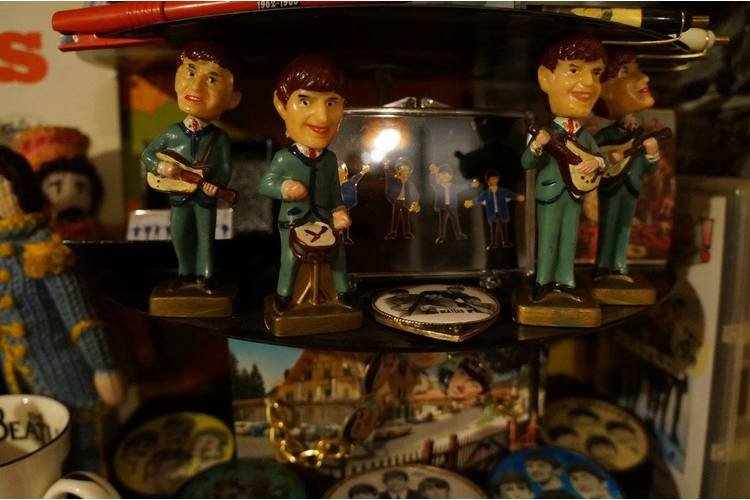 In addition to that, she also holds cocktail hours and the special dinner that caters to as much as 8 guests inside the cabinet of wonders, the collection room at the back of the Pocket Museum door. Matthias was formerly a lantern and mask painter for several Carnival cliques in Basel, which are identical to the krewes in New Orleans. Today, he primarily channels his artistic abilities to his wife’s clique, the Weather Witches, and in designing, developing, and setting up Pocket Museum displays. “I’m the management, he’s the creative director,” Dagmar says.

The Vergeat couple are putting the brakes on their personal collection, however, as they are already getting short of space.  The collections are crawling towards the upper level of their home— a silver cake serves as the frame of a kitchen window and an art of Carnival themes outline their home’s stairwell. “I find joy in old, beautiful things,” Dagmar says. “If I had more space, I would have many, many, many more things.”

The Difference Between McDonalds in America and Finland
On October 3rd, 2017, McDonald's introduced the McVegan — yes, a vegan burger at McDonald's...

Headed to the Rio Carnival? Here’s How to Enjoy Brazil’s Ultimate Party
It’s the party that literally takes over the city. Here are tips to keep in mind when visiting Rio’s legendary Carnival.